Skip to content
Home/Clean living/If you read one article about climate change, read this one
Previous Next

If you read one article about climate change, read this one

Since today is World Environment Day we’re going for it: climate change. The hot button topic du jour. Some believe it’s beckoning the end of human existence while others don’t acknowledge it’s real. It has become such a political issue, it’s hard to know what’s actually true. Is the world really ending, or is it not? What is true and what isn’t? Does it even matter?

We’ve decided to get in the mix but by taking an utterly non-political dive into the topic. In this article, we’ll define climate change, what it is, and its effect. We’ll touch on why people doubt its existence, and we’ll provide practical solutions. We’re not speaking to scientists or people already well-versed on the issue. We’re writing this article for those of us who’ve heard a lot about climate change and want a basic understanding of what it is.

What is climate change

Climate change refers to the group of weather-related changes happening on the planet.

The reason that climate change is an issue today is that scientists are concerned that the natural fluctuations in the climate are occurring more rapidly when compared to the past,  and it is thought to be because of human behavior. According to these scientists, if we don’t pull back on this behavior, it will have severe consequences on the planet’s stability. We’ll address this human behavior is further down.

Some reasons scientists are convinced that climate change is real.

This is the evidence they cite:

One of the most apparent indicators of severe weather is the increase in the number and severity of various weather events such as:

What does that have to do with us

It boils down to the Earth’s natural greenhouse and the gases that contribute to it.

It’s the significant increase in carbon dioxide that makes scientist certain human activity is a primary culprit in what we call climate change.

Since the industrial revolution, the amount of carbon dioxide in the atmosphere has almost doubled from 280 ppm during the pre-industrial era to 400 ppm today. This increase has taken place because of the number of fossil fuels we’ve burned over the past few years. Additionally, human activity coming from industrial waste and land clearing from agriculture has also contributed to the number of greenhouse gases in the atmosphere destroying the Earth’s natural balance.

The consequence of this increase in greenhouse gases results in the phenomena listed above.

The reasons are many, but the Public Religion Research Institute outlines it very nicely in the below chart. 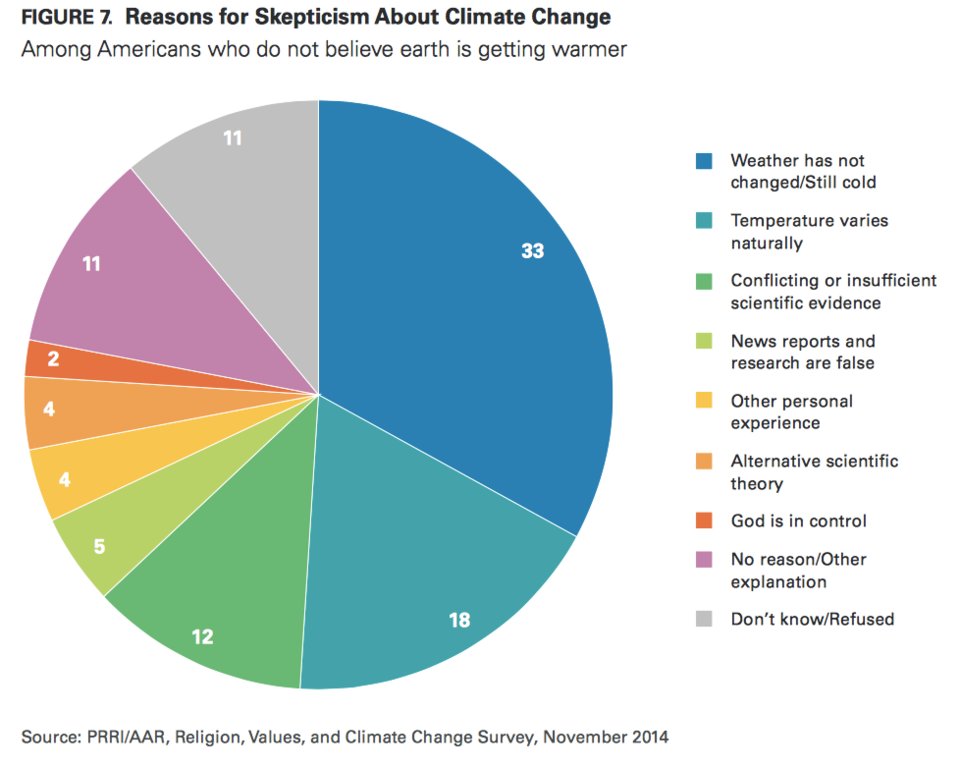 Whether or not you agree, it is refreshing to live in a country where we’re not forced to agree. A country where it’s okay to doubt mainstream knowledge because even though there appears to be scientific evidence to support climate change, not all scientists agree on the source and cause. So if not all scientists agree, there is room for doubt, and we should respect that. However, should this change our response to it?

We don’t think so.

How should we respond

Whether you agree with climate change or not, we can all agree that there is no harm in taking care or stewarding the resources we were given. We didn’t make them, we were just tasked with taking care of them. And just like we do with everything else that we own, why is it a problem to do the same with the environment. Just as it’s tacky to litter when there is the option to leave the planet better than when we first met it, why wouldn’t we?

If you have the option to use renewable energy sources, to stop polluting the air and waterways, to treat people fairly, why wouldn’t you?

As far as the political perspective is concerned, who knows? We have no idea what policy works or is best. What we’re here to do is speak to the individual.

That being said, here are some practical things you can do, when you have the option, that will benefit both you and the planet you live in

The bottom line is, where you can use less, do so. Whether or not you believe in climate change, stewardship is the issue here and that we can all agree to do well.

Did you find this article useful? If you did, please share it with your friend.

Are there any points we missed? Let us know in the comments.

Any cookies that may not be particularly necessary for the website to function and is used specifically to collect user personal data via analytics, ads, other embedded contents are termed as non-necessary cookies. It is mandatory to procure user consent prior to running these cookies on your website.